Customers accessing JTâs 4G mobile network in the Channel Islands using the latest mobile handsets are now experiencing the fastest network. Thanks to a software upgrade JT has recently undertaken.

JT’s 4G network was recently independently proven by almost 600 Islanders to be the fastest. Even better, with the scheduled upgrade it further improves the customer experience.

In technical terms, the upgrade means that users of the most popular and high-spec handsets, like the iPhone 6S and the Samsung Galaxy S7, are now able to enjoy an even quicker mobile experience. Typically up to 30% faster than before. For example, on the Samsung Galaxy S7 speeds of up to 300Mb/s are now achievable. Meaning this is a new maximum speed that is better than double that of the other providers in the Channel Islands.

When it Comes to Connectivity, Speed is Vital

Thierry Berthouloux, JTâs Chief Technology and Information Officer, said: âWhen it comes to mobile connectivity, speed is vital. Weâre delighted to bring more good news to our mobile customers. Thus, enabling them to experience even faster download speeds using their mobile devices. The Channel Islands have one of the highest penetrations of smartphones in the developed world, and so providing customers with improvements to our network wherever we see an opportunity is something we will continue to do through investment and staying ahead of the latest technology.

âThis latest upgrade will be especially useful for anyone who relies on their mobile to do business on the go. Keeping them connected at the best possible speeds wherever they are. It will also be great news for festival-goers at JT sponsored Jersey Live in September, allowing music lovers to download/stream and do more than ever on their mobiles. We were the first network to complete this in the Channel Islands. It is still part of our on-going work and investment in our network alongside our partner, ZTE. Therefore, ensuring our customers have access to the very best network we can provide.” 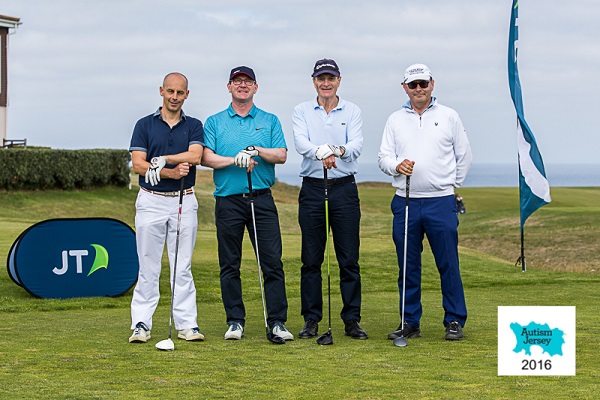 Good weather and yet another excellent turn-out ensured the success of the day. A day which involved 22 teams enjoying a round of 18 holes followed by lunch in the Clubhouse. A raffle and auction, including a golf flag signed by 2016 Ryder Cup Captain Darren Clarke, boosted the funds raised. These funds will go directly towards the development of a purpose-built Autism Centre in Jersey.

The winning team was Elian with an outstanding score of 104. Followed by Quilter Cheviot with 92 and Ashburton with 89. Meanwhile, individual prizes went to Derren Glover of JT for the menâs longest drive. Also to Alexa Saunders of Carey Olsen for the womenâs longest drive. And finally to Martin Smith of Dandara for the nearest the pin.

During the lunch the chairman of Autism Jersey, Nick Winsor, told guests that Autism Jersey is on a mission. A mission to provide the support that is needed on the Island. He spoke more about plans for a purpose-built centre for autism in Jersey. A site in Trinity has been identified, and plans drawn up, he said.â¨Thanking JT for their support of the annual Golf Day, he said: âMoney raised today will go directly to that centre.â He also expressed his thanks to Autism Jerseyâs Patron, Lieutenant-Governor General Sir John McColl who, he said, had been âincredibly supportiveâ of the charity.

Sir John who had taken part in the golf day added: âThe Charityâs progress has been absolutely remarkable. It has made such a difference to families that need support.â

JTâs Director of Corporate Affairs, Daragh McDermott, said: âAutism Jersey is a charity which offers invaluable support to islanders affected by autism and their families. We are, as ever, very pleased to support them in their fundraising efforts by sponsoring and taking part in this phenomenally popular annual golf day at La Moye Golf Club. Not only was the weather on our side but there was some great golf demonstrated by the participants. Thanks must go to each team for their support once again and congratulations to all the winners.â

Autism Jersey aims to raise at least Â£1.5 million for the centre in a joint effort with the States of Jersey.

The streets of Jersey are being brought to life this August with the sounds of some of the Islandâs best young music talent. Thanks to JTâs Music Moments FREE âpop-upâ mini-gigs.

Organised by the long-term headline sponsor of Jersey Live, JT, passers-by are being treated to impromptu live performances. This includes some of Jerseyâs most talented home-grown local musicians, bands and singers at different spots all around the Island. Because of this success more mini-gigs planned for the pavements of St Helier and St Aubin throughout August.

Kacey Hacquoil (Kaceyâs Music Moment)
âI think itâs great that JT are getting out and about and giving the youngsters a chance to play in public. It really helps our confidence as performers and it is good fun.â

David Keenan (Davidâs Music Moment)
âThe JT Summer of Music is a great campaign to showcase a range of local performers to the public. Iâm sure a nice touch for passers by to enjoy some home grown talentâ¦ Looking forward to Jersey Live now!â

Gavin Tate (The GaaGaas) (Gavin’s Music Moment)
âThanks for getting me involved with the JT Summer of Music campaign for Jersey Live. Itâs always a pleasure to play and support the local scene whenever Iâm in town!â

Tamara OâBrien, Head of Marketing at JT explained what itâs all about:

âWeâve been really surprised by just how the public have got behind the JT Music Moments idea.Â  It started as a way for us to help provide opportunities for some of Jerseyâs brilliant local youngsters to perform their music to live audiences in unusual locations. So far, of the 15 pop-up gigs, weâve seen a staggering 676 likes from the videos and 15,882 views. Therefore, this shows just how popular these young artists are. Weâre running the free gigs right up until Jersey Live. Also, we’re pleased to offer opportunities for more younger people to attend Jersey Live with our new âkids-go-freeâ customer promotions launched today.

âMusic Moments is a way to celebrate the high standard and wide variety of music talent that exists in our Island. Our JT Summer of Music programme offers young people the chance to get up on stage in front of audiences to gain exposure and experience. We build up to the ultimate event of our programme of music sponsorship for 2016, Jersey Live in September. We hope the remaining performances inspire others to keep on pursuing their music ambitions. Please join us in celebrating all that Jerseyâs music scene has to offer.â

Look out for the next JT Music Moments

Each Music Moment is posted to the JTSocial Facebook. JT is encouraging people watching them to post their own clips of the performances for a chance to win a prize from JT worth Â£1,000. But, also to help these singers raise their profile.Â  JT has been the headline sponsor of Jersey Live for 11 years. The JT Stage has always provided a stage for local bands and talent to perform alongside seasoned professionals and visiting bands.

To attain this important certification JT was required to demonstrate that its Data Centres and Cloud Service align with best practice. Especially, around an effective Information Security Management System (ISMS). Adhering to the set of controls outlined by ISO/IEC 27001, means JT has examined the risks around information security. And thus, has put in place policies and procedures to manage those risks. This will help protect its information assets and those of its customers.

As the Channel Islandsâ leading provider of Data Centre facilities, JT already meets the highest level of recognised industry standards. This includes the certification from Service Organisation Controls (SOC 2 and 3) and achieving the Payment Card Industry Data Security Standard (PCI-DSS). In addition, in 2015 JTâs award-winning Cloud Platform became the first of its kind to gain regulatory approval from the Alderney Gambling Control Commission. And it was allowed to host global eGaming customers. Even recently it received the Best Go-to-Market Cloud Strategy Awards in the inaugural Telco Cloud Forum Awards.

A Testament to the Hard Work of our Team

Managing Director of JTâs Global Enterprise Division, Paul D Taylor, said: âAchieving another major level of accreditation is a further demonstration of the level of quality of our market-leading Channel Islandâs hosting facilities.Â  ISO/IEC 27001 is a highly regarded and much sought after certification. Adding this to our portfolio of quality endorsements is testament to the hard work of our teams that have played part in ensuring that we adhere to the most stringent controls. Iâm very proud of the joint commitment shown by our teams to delivering the very best service levels across the JT Group.

âAchieving ISO/IEC 27001 further underpins our commitment to ensuring our hosting and Cloud service is as broadly accredited and secure as any in the Channel Islands. Hosting is a fiercely competitive sector. Our global customers expect the highest level of commitment to compliance and governance. So, itâs important to differentiate the service we offer by continuing to secure industry standards like this. Â Importantly, achieving this certification on top of our existing accreditations bolsters our profile. Especially, amongst a wider global audience and differentiates JT as a secure, trusted partner.â

David Cartwright, JTâs Group Security Officer, said: âThe award shows our customers that security is absolutely fundamental. Especially, to the day-to-day operation of the services we offer. We already had huge confidence in the quality of our operations. However,Â  this certification provides further authoritative independent confirmation and surety to our customersâ.