JT is the official Technology Partner for a world-class triathlon event being held in Jersey next month. 50 of the worldâs leading male and female triathletes. This includes 25 olympians from around the world who will compete in Jersey, British Isles, for the Super League Triathlon crown on Saturday 23 and Sunday 24 September.

Therefore, two days of intense competition will be televised and streamed around the globe. JT is also providing technical support, mobile communications and super-fast internet access to the broadcast team and race organisers. JT has pedigree in this area: two years ago, the company was Technology Partner to the successful 2015 Island Games in Jersey, providing the technology to make the Games the most connected in its history.

Graeme Millar, Chief Executive Officer of JT, said: âA world-class event needs world class infrastructure, which JT is well placed to provide. Because of our investment in our mobile and fibre networks, a significant sporting roadshow like the Super League Triathlon can arrive in the Island and broadcast to millions of people with relative ease.

âThe St Helier Waterfront is also a perfect backdrop for this weekend. A weekend of intense competition. Iâm sure the whole Island will get behind it. So, Iâm pleased that JT can play its part in showcasing Jersey to the world.â

Super League Triathlon founder Micheal DâHulst said: âOne of the reasons why Jersey is a perfect venue for this action-packed event is not only because of its striking beauty but also because of its fantastic infrastructure. So, from an outsiderâs perspective, itâs incredible to think that such a small island can have mobile and broadband networks. Especially ones that put much larger jursdictions to shame. Therefore, JTâs can-do attitude has been invaluable and has given us huge confidence in the Island. Weâre already planning on coming back.â

Notes to Editors
Super League Triathlon aims to bring mainstream attention to triathlon. Moving the sport into the âbig leagueâ of sport entertainment. Athletes compete in a series of rounds which incorporate the three disciplines of triathlon over short âsuper-sprintâ distances. 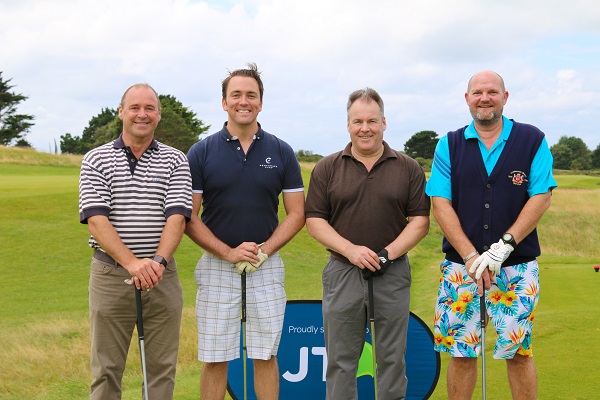 A dry day and yet another excellent turn-out ensured the success of the day. This involved 22 teams enjoying a round of 18 holes followed by lunch. This was served in the nearby Les Creux Bowls Club due to the refurbishment of the club house. A raffle and auction, including a golf flag signed by Henrik Stenson, winner of the 145th Open Championship, boosted the funds raised. These will go directly towards the development of a purpose-built Autism Centre in Jersey.

The winning team was Kedge Capital with an outstanding score of 94. Followed by Continuum with 91 and Estera with 89. Meanwhile, individual prizes went to Dan Burchell of CPA Global for the menâs longest drive. Also to Brona Lambert of Moore Stephens for the womenâs longest drive. Finally, to Steve Morgan of Quilter Cheviot for nearest the pin.

Nick Winsor, the Chairman of Autism Jersey, said: âOnce again the Autism Jersey Charity Golf Day was a great success. I was delighted that our patron, the Lieutenant Governor Air Chief Marshal Sir Stephen Dalton, could join us. The important work of Autism Jersey would not be possible without the generous support of local businesses. I would like to make a special mention of the sponsor for the day, JT.â

Daragh McDermott, Director for Corporate Affairs at JT said: âAutism Jersey is a charity which offers invaluable support to Islanders affected by autism and their families. We are, as ever, very pleased to support them in their fundraising efforts by sponsoring them. As well as taking part in this phenomenally popular annual golf day at La Moye Golf Club. Not only did it stay dry but there was some great golf demonstrated by the participants.Â  Thanks must go to each team for their support once again and congratulations to all the winners.â

Autism Jersey aims to raise at least Â£1.5 million for the centre in a joint effort with the States of Jersey. It is envisaged that the centre will be operational in 2019.

JT has seen a 100% increase in customersâ data usage while abroad since reducing roaming rates by 95% at the start of the summer.

JT was the first local telecommunications provider to introduce significant roaming reductions. This means that customers are enjoying savings of up to 85% when compared to other local providers. Plus with a roaming âbolt-onâ JT customers can now roam for as little as 10p per MB in the UK and France.

On average customers have already doubled their communications activity while roaming. They make 20 minutes of outbound calls, send 33 texts and are now using 145 MB of data. This is equivalent to streaming close to 5 hours of music on Spotify.

Now, also with the introduction of 4G roaming only from JT, JT is the first to offer the most flexible and cost effective all round roaming offer.Â  Plus, with super-fast connectivity. For customers travelling to the UK and Europe, downloading maps, accessing emails or sending large attachments and uploading holiday snaps, it is as quick and easy as it is at home.

Dominic Vye, JTâs Head of Commercial Development, said: âIt is excellent to see islanders taking full advantage of reduced roaming rates while on holiday this summer. We specifically launched our reduced rates before the summer holidays started. This was so families, travellers and holidaymakers could take full advantage of the reduced charges this summer. We still encourage all our customers to roam responsibly while abroad. Please ask in store if you have any questions.â

As the Channel Islands are not part of Europe, local operators are still charged to connect their customers by the international telecoms companies.