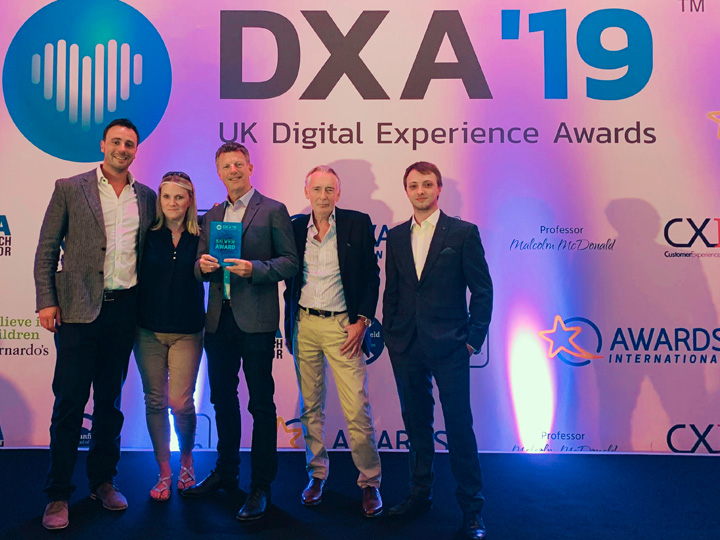 JTâs free My Account customer app, the only one of its kind in the Channel Islands, has been awarded the silver award in the Best App category at the recent UK Digital Experience Awards 2019 (UKDXA) â coming second to BTâs entry and ahead of Manchester Unitedâs football App.

The JT team led by Dominic Vye,Â Head of Commercial Development, attended the awards held in London on Friday 12 July. âThe team were already so pleased to have been shortlisted but being awarded silver in such a competitive category which included national household names is a really fantastic achievement for both the team and our customers, who have helped us to build it,â said Dominic.

Now in its 5th year, the UK Digital Experience Awards (UKDXA) celebrate the ways in which todayâs digital technology is used to enhance customer experience. The awards provide a platform for organisations and individuals to celebrate the partnerships they have formed and be rewarded for their digital innovation and customer-centric culture.

The JTÂ My AccountÂ AppÂ was built locally, in-house, by JTâs team of software developers working together with Hollis Consulting. The Appâs success is thanks to a collaboration with JTâs own customers who provided the feedback that initiated the idea and continued to help via research panels and surveys throughout the development process. The result of working together with JTâs own customers is an App which provides a way for them to manage their services and view their bills on mobile devices, giving them the freedom and flexibility to monitor and control their account, when and where they need to. JTâs App has now been downloaded over 40,000 times with over 32% of JT customers now actively using it daily.

JT customers continue to play a leading role in the evolution and improvement of the App design and functionality, ensuring new trends and needs are considered. The App now includes live chat which allows customers to interactÂ directlyÂ withÂ theÂ JTÂ team and contact them to resolve queries faster than ever before. The simple and easy-to-use App has resulted in customer bill queries reducing by over 50% and has also had a positive contribution to JTâs commitment to the environment by reducing the need for paper bills by 62%.

âThe interaction we have with our customers remains hugely important to the success of the JT My Account App, without them this would not have been possible. Being recognised by DXA is a testament to the relationship our teams have developed with our customers, so a big thank you to them for their continued support,âÂ said Dominic.