Home > How much is that doggie in the window? Pug-love kicks off JTâs 2017 charity campaign 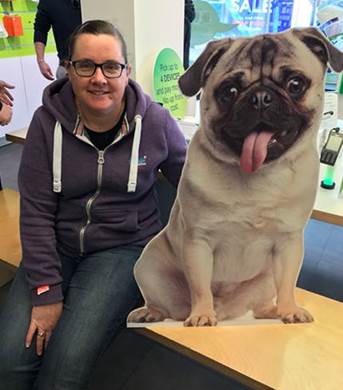 How much is that doggie in the window? Pug-love kicks off JTâs 2017 charity campaign

A cardboard cut-out of a Pug dog on display in the window of JTâs Queen Street store has been auctioned off. This has kick-started JTâs 2017 charity campaign to support charities linked to Alzheimerâs Disease.

On social media the two-dimensional dog generated a lot of interest on JT’s Facebook page. 100âs of followers asked if they could have the two-foot pooch once it had finished its duty of promoting JTâs New JT One campaign.

JT decided to auction off the pug on Facebook. And, Kirsten Murphy became the proud new owner with her winning Â£35 bid. The cut-out featured in her daughterâs birthday celebrations.

A New Owner for a Dog in Need of a Home

Christophe Chateau, JT Group Head of Culture and Staff Engagement, said: âWhat better way to launch a charity campaign than by finding a new owner for dog in need of a home. In all seriousness, though, JT has a proud record of supporting local charities. Kirstenâs donation gets the ball rolling. Last year, we raised over Â£25,000 for baby-related charities. Iâm sure our amazing people will raise a similar amount for charities supporting islanders with Alzheimerâs Disease. This is the most common type of dementia and more prevalent as the numbers of elderly people increase.

âThroughout the year, JT people will run, walk, dress-up, bake, and collect for charity, and lots more besides. Our customers too are incredibly supportive. It promises to be a busy year.â

Mark Blamey, Manager at Jersey Alzheimerâs Association said: â We are thrilled that JT and their employees have chosen to support the Jersey Alzheimerâs Association this year. We are a local charity for local people whose lives have been touched by dementia. We are reliant on money raised by individuals and businesses to continue the work we are doing. This is for the people with dementia and their families.â